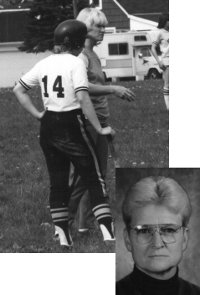 What began on the City of Lorain softball fields in 1957 has evolved into an accomplished and enduring career as an athlete, and teacher, coach and sports official for Nancy Domanski Bauer.

Nancy attended Admiral King High School from 1961-1965, when only sports-oriented activities such as intramurals and cheerleading were available to the female students. Nancy pursued roller skating at the Lorain Rollarena and won a three-state invitational title in “school figures.”

In 1968, she began teaching Health and Physical Education at Lorain High School. With limited opportunities for female students, as Title IX was not yet mandated, she campaigned for organized sports for women. With encouragement from Principal Phil Ryan, she was instrumental in establishing many firsts: an exhibition trampoline team and co-ed ski club (1969), girls track team (1970), (becoming the first female interscholastic sports in the Lorain City Schools), gymnastics (1973), and softball teams (1972). She introduced a Lifetime Sports Class for junior and senior girls and was the coach for the girls bowling team and cheerleading advisor.

Nancy continues to officiate high school volleyball. Numerous sectional, district, regional and state tournaments have been part of her assignments over the past 35 years; most noteworthy was officiating at the Ohio State High School Tournament Semi-finals and Championship games.

For over forty years, fast and slow pitch softball played a major part in Nancy’s life as a player and coach. Her teams have competed all over the United States and Canada and have been ranked on the State and National levels. She coached Kerr Beverage / KB Waldron to the 1995 ASA Class C championship and also had two teams that finished in second place over the years in tournament play.

Playing in the ASA program in 1979, she was voted All-Ohio First Baseman and in 1984, was named to the All-Regional team as a catcher. In 1996, Nancy received the Most Valuable Coach Award at the Ohio NSA State Tournament.

Nancy and her husband, Tom, reside in Lorain. They have a daughter, Kelly, and a granddaughter, Morgan.