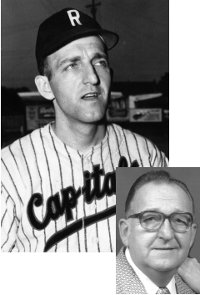 Henencheck, in 1940 at the age of 20, signed a minor league contract with Salem-Roanoke, a Class ‘D’ team in the Virginia League. He spent two seasons with the team, pitching over 200 innings each season while compiling a combined record of 29 wins and 26 losses.After developing a reputation in lower classes of sandlot play, the seventeen year-old hard throwing right-handed pitcher joined the Lorain Elks baseball team which was the perenial dominating team in the Lorain City Class ‘A’ league. The team roster included several talented players who were signed to professional league contracts. Al played with the Elks team for two seasons and as their star pitcher, attracted the attention of professional scouts. Unfortunately, he lost four years of prime development experience during the period from 1942-1945 as he served in the military during World War II. After completing his military service, he resumed his baseball career with the Raleigh Capitals, a Class ‘C’ team in the Carolina League. He split the season with Raleigh and Class ‘B’ Evansville to finish with a 14-6 record while pitching 151 innings. Al continued his outstanding performance during the next three seasons at Raleigh and Class ‘B’ Pensacola, compiling a 59-25 record, pitching 211, 249 and 234 innings respectively. This performance earned him a promotion in 1950 to the Atlanta Crackers, a Class ‘A’ team where he finished with a 7-6 record. This was the highlight of his career. He retired in 1953, at age 33, with a career record 132-91 and a 3.20 earned-run-average. Henencheck returned to Raleigh, NC to resume his employment as a sales representative with the State Capitol Life Insurance Company. Al and his wife Virginia raised two step-children and a daughter Cathy, and he died in 1981 at the age of 61.