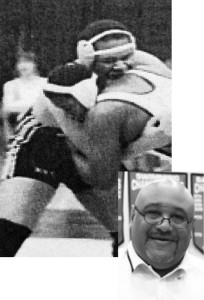 A premier heavyweight wrestler.  An outstanding football player.  A dedicated coach.  Any one of those three descriptions could earn a person public acclaim.  But all three together describe Gary Huff.

While best known for his wrestling, Gary Huff’s first choice of sports as a student at Lorain High School was football, and he was a two-year varsity starter.  His performance won him spots as First Team All-Conference, First Team All-County, First Team All-District and Special Mention for the All-State Team.

It was at the end of the 1981 football season that Gary Huff’s position football coach, Terry King, insisted Huff start wrestling.  Though he tried to avoid it at first, Huff finally enthusiastically seized the sport and excelled.

“Pin them fast and be done.”  That was Huff’s personal guiding rule as a wrestler, and it brought him 66 career wins — 53 of them by pins (80.3%) — and only 12 career losses.  He once pinned the eventual state champion in only 44 seconds.

With his record improving each year, Gary Huff became a two-time wrestling champ of the Vermilion Invitational, the Buckeye Conference, Sectionals and Lorain County All-Stars.  As a junior, he captured the team record for most pins and was the Sandusky St. Mary Invitational champ.  His senior year saw him ranked 2nd in the state with 25 pins in 29 wins, and only 1 loss.  He also was Buckeye Conference MVP and District champ that year.

After graduating in 1982, Huff returned his focus to football, and became a two-year varsity letterman at Findlay College.  He played defense as a freshman and offense as a sophomore before a serious shoulder injury ended his career.

After college, Huff was an assistant football coach at area schools, including Lorain High, Admiral King, Brookside and Westlake.  He also was an assistant wrestling coach at Admiral King in 2009-10.  Gary also encouraged Murray Ridge students in their participation in the Special Olympics event.

Huff was inducted into the Lorain County Wrestling Coaches and Officials Association Hall of Fame in 2016 in recognition of his contribution to the sport of wrestling.

In sports, and life, Gary Huff is a true champion.