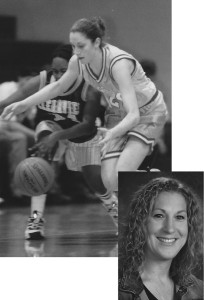 Holly Koepp was an outstanding basketball player at Lorain Catholic High School during the period of 1995-99, setting career records as the leading scorer with 1752 points and leading in rebounds with 1024.  As a four-year starter, she averaged 25.9 points per game in her senior year and 25.6 as a junior.  She holds the Lorain County record for rebounds with 351 in a season; and, the three-time county and two-time district player of the year was also first team All-Ohio for two years.  Holly was named Lorain County Miss Basketball at the end of her high school career.  While at Lorain Catholic, the 1999 class president was every coach’s dream as a scholar/athlete, being ranked 6th in her class.  She also found time to be part of numerous community and extracurricular activities.

Although recruited by several Division I schools, Holly chose Division 3 nationally-ranked Baldwin-Wallace College to continue her basketball career where she was a three-year starter and four-year letter winner.  She would continue her hoop domination at Baldwin-Wallace, scoring 1150 points.  Holly was a four-year academic All-Ohio Athletic Conference selection and three-year AII-Ohio Athletic Conference Team selection.  Holly was inducted into the Baldwin-Wallace Sports Hall of Fame in 2015.  Quoting the Baldwin-Wallace Sports Hall of Fame announcement dated August 20, 2014: “Koepp was one of the finest womens basketball players to ever play at B-W”.  She led her teams to a 100-17 record, two OAC regular season and two OAC Tournament titles and three NCAA Division Ill Tournament berths.  Twice she led BW to an “Elite 8” finish in the NCAA tourney.  Holly currently stands seventh all-time in scoring with 1150 points, fifth with 737 rebounds and ninth with 150 steals.