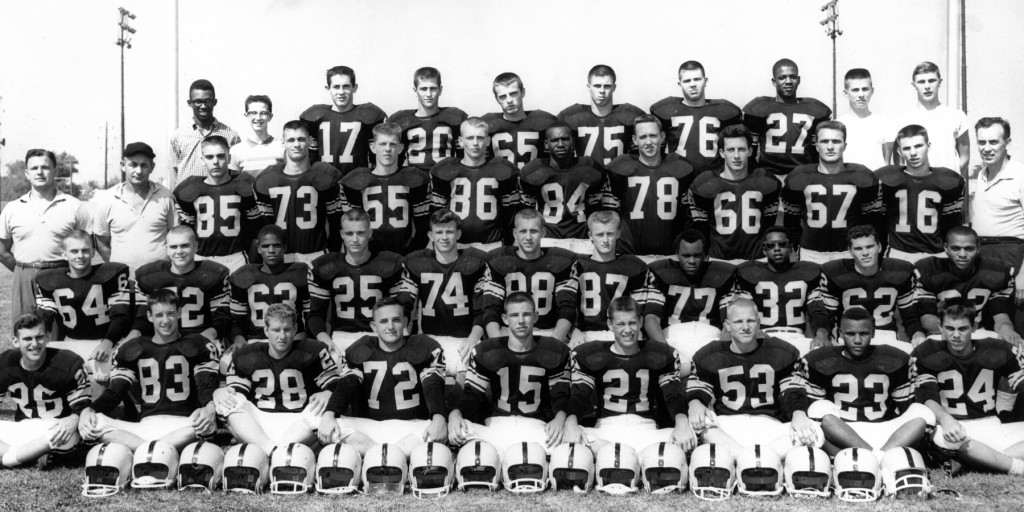 The 1959 Lorain High School football team will always be recognized as one of the finest in the history of LHS. Nineteen seniors and a group of talented juniors led the team through one of the toughest schedules in the state of Ohio.

On Oct. 10, 1959, LHS played Warren Harding High School in the hostile environment of their stadium. With LHS ranked third in the state, and Warren ranked second, it was a highly contested battle. Future NFL Hall of Fame receiver Paul Warfield led Warren’s offense at running back. Late in the game, the Steelmen had Warren backed up to their own 16-yard line. However, Warfield turned a broken play into an 84-yard touchdown run. With the score 14-6 in Warren’s favor and 2:22 remaining, Quarterback Bill Tippie started the LHS drive from their own 18-yard line. The move down the field was culminated with a 21-yard touchdown pass to Mike Mishak. A short plunge attempt by Ray Martin for the 2 point conversion was unsuccessful, with the game ending 14-12.

As painful as the loss was, the most devastating loss was a season-ending injury to the great running back, Harold Jones. Ohio State Football Coach Woody Hayes, at the time, said that he considered Paul Warfield and Harold Jones to be the two finest high school running backs in the state. With a final game loss to Elyria High, LHS ended the season ranked ninth in the state, with a record of 7 wins and 2 losses and the Buckeye Conference co-championship with Marion Harding and Elyria.

The team received a remarkable number of awards for their outstanding season, including the following: Coach Art Lave was named Coach of the Year in the Buckeye Conference. Ray Martin, Mike Mishak, Jim Turton, Willie Rodgers, Dale Warfield and Jerry Zavada were placed on the All-Buckeye Conference First Team, and Calvin Bobrowski and Ken Gerhardt were named to the Second Team.