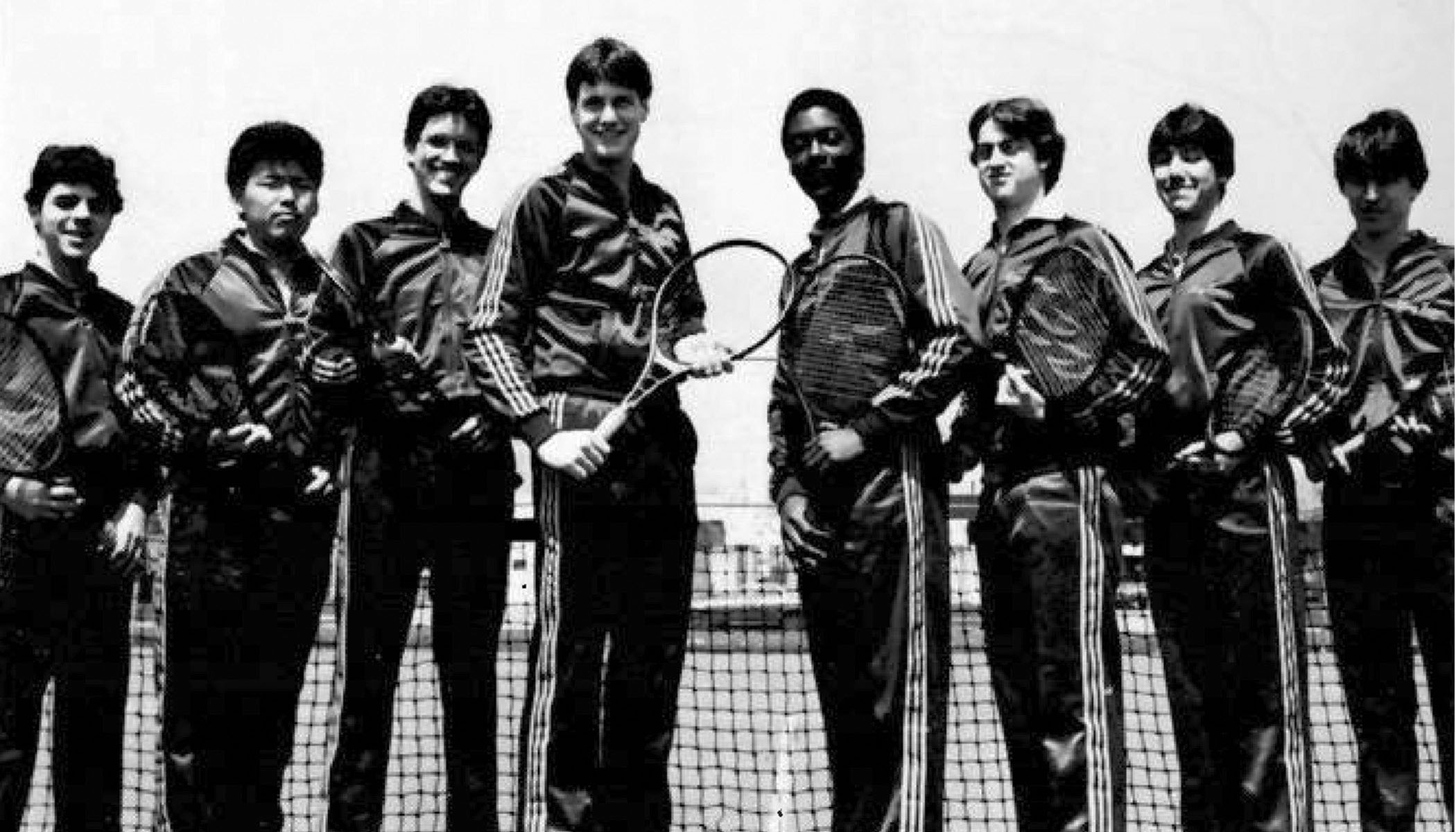 The 1984 Admiral King High School tennis team became only the second in school history to finish the regular season undefeated with a record of 18-0. They were ranked 5th in the state and finished the postseason with a total record of 21-1. Their only loss came at the hands of the best team in the state, Orange High School. The Admirals won several team titles that year, the Buckeye Conference, Lorain County Athletic Administrators Tournament, and Lorain City Championship. The team advanced a Lorain County record of two singles and two
doubles teams to the District Tournament. Jim Gray made it to the State Tournament and finished in the top eight. Both Gray and Adrian Harris completed the season undefeated and were Buckeye Conference Champions. Jim was the winningest player ever at Admiral King with Adrian a close second. John Hwang was third singles, Frank Polito and Mike Spinale were at first doubles and the second doubles team was George Gonas and Dale Andorka. Matt James was a substitute player.

King was coached by Lorain Sports Hall of Famer, Frank Hicks. At this point in his career, Hicks had amassed 304 wins and 105 losses in 24 years of coaching. Frank retired in 1996 with record of 644 wins 201 losses.

Here are a few details on the 1984 team. 1st single, Jim Gray, played for four years at Purdue University and is now the head teaching Pro at the Sandestin Golf and Beach Resort in Destin, Florida. 2nd singles Adrian Harris is a bank official in Philadelphia. 3rd singles, John Hwang, is an optometrist with Target and lives in N. Ridgeville. 1st doubles, Frank Polito, who played for Eastern Michigan, turned his tennis experiences into coaching. He has coached at numerous universities and is now the head Women’s coach at Cleveland State University. Mike Spinale, the other partner in the doubles team now resides in Plymouth, Michigan. The 2nd doubles team consisted of Dale Andorka, working at Fligner’s in the Banquet Department and lives in Amherst; and George Gonas who is retired from the Army as a Major and now lives in Watertown, New York. Lisa (Hicks) Dael was the manager, record keeper and did the laundry for the team. She is the assistant to the director of online Education at Ohio University and lives in Athens, Ohio.

Coach Hicks says, “Of the four undefeated teams that I had at Admiral King, this one was the strongest.”