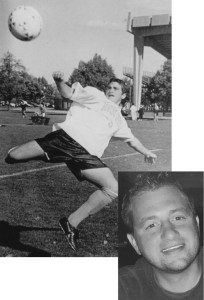 From high school through college, and into his professional career, Chris Doré earned success in soccer.

The 1996 Lorain Catholic High School graduate was an outstanding four-year player for the Spartans.  His 128 high school career goals ranked him 8th in Ohio high school soccer history at that time. In 1995, he led the state of Ohio with 42 goals.  He was twice named to the Ohio High School Soccer Coaches Association All-Ohio Team. He also was in the Olympic Development Program, 1990-1995, and he was named to the United States U18 National Team, 1995-1997.  Chris also was a member of the Midwest Regional Team, 1993-1995, and trained with European Professional Clubs in Italy and Sweden.

At Bowling Green State University, he enjoyed a great four years as a starter. He became the 6th All-Time B-G career points leader and was chosen as team captain two years.  Among his numerous college soccer honors, he was named to the Mid-American Conference All-Tournament and All-Conference Teams, the NSCAA Division I All-American Team and the Ohio Collegiate Soccer Association All-Ohio Team. He also was named to the U.S. U23 Olympic Pool Team.

Following college, Chris went on to a five-year professional soccer career.  He was selected 2nd overall in the 2000 A-League United Soccer Leagues draft.  He played for the Virginia Beach Mariners, Cincinnati Riverhawks, Charlestown Battery and Syracuse FC. He was drafted by the Cleveland Crunch in the NPSL, and he also played for the Cleveland Force of the Major Indoor Soccer League, 2003-2005. A sports injury ended his professional career.

In the years since 2005, he has won multiple coach of the year honors for his work with recreational and high school soccer players.  Chris Doré resides in Avon, Ohio, where he is varsity head coach of the Avon High School Eagles Boys Soccer Team.