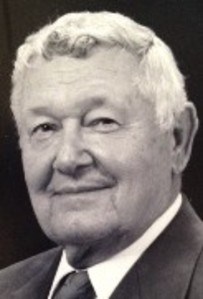 The Lorain Sports Hall of Fame is mourning the death of Ed Dohanos,95, on March 12, 2021.
For generations, Ed Dohanos was a well-known and respected figure on the Lorain County sports scene, as an athlete, in coaching and officiating. He was a three-time enshrinee in the Lorain Sports Hall of Fame, as well as being a past president (2008) and current board member of the LSHOF.

EDWARD STEVAN DOHANOS, AGE 95, OF WELLINGTON, PASSED AWAY ON FRIDAY, MARCH 12, 2021.
Ed, born in 1926, was raised in Lorain, graduating from Clearview High School. Upon graduation, Uncle Sam beckoned him to serve in the US Army during World War II in the European Theater of Operations, where he received two Purple Hearts. Honorably discharged, he attended Baldwin Wallace for his Bachelor of Arts and continued on to receive his Masters in Health and Physical Education from Kent State. While studying for his Doctorate, the US Army recruited him once again – this time for 13 summers to conduct biological, radiological and germ warfare research. When Admiral King High School was constructed in 1960, he became its first Science Department Head and retired from that same position 30 years later.
Lettering in football, basketball and track during high school and then football and track on the varsity levels at Baldwin Wallace, Ed went on to devote his life to sports. His coaching experience included many years as either head or assistant coach for high school football, basketball, baseball, track and volleyball. His officiating experience included 55 years as a football official, 50 years for basketball, 44 years for track, 10 years for baseball, and 3 years for volleyball. In addition to officiating at both the high school and college levels, Ed had 15 years of semi-pro football. He also had the honor of being selected repeatedly to officiate state playoffs for football (38 years, including 5 finals), basketball (40 years), baseball (2 years), and the state track meet (23 consecutive years). A very proud addition to his list of accomplishments are the 15 years he worked on the Chain Crew for the Cleveland Browns.
He served as the football rules interpreter for 11 years for the Northern Ohio Football Association and as the basketball rules interpreter for 12 years for the Northern Ohio Basketball Officials Association, and was a past president of both organizations. Ed had also been the Commissioner of the Erie Coast League, the Northern Ohio League, the Firelands Conference, the Lake Erie League and the Southwestern Conference for a combined total of 71 years. He is credited with starting the Lorain County Track Officials Association and managing the sectional district AAA tournament at Admiral King High School. He’s been inducted into the Lorain Sports Hall of Fame three times (once as an individual and twice as a coach), the Clearview Hall of Fame, the Lorain County Basketball Officials Hall of Fame, the Lorain County Coaches Hall of Fame, the Lorain County Football Hall of Fame, the Ohio High School Hall of Fame, and the Cleveland Basketball Hall of Fame. He also received the National Federation Distinguished Service Award, the NOBOA Presidents Award, the OHSTA Contributors Award and numerous other awards and honors. Most recently, he served as an evaluator of officials for the PAC Conference and sat on the selection committees for Golden Helmet, Mr. Basketball, Miss. Basketball, Mr. Baseball and Miss. Softball.
Ed resided in Wellington with his wife, Faith, where they enjoyed family gatherings with their six children, fourteen grandchildren, and twenty-four great grandchildren. When he wasn’t at a sporting event, you’d find him in his garden……he often boasted about having the best and earliest sweet corn of the season!
Ed leaves behind his wife of 44 years, Faith (nee Maag), his children; Linda (Richard) Smith, of Marysville, OH, Judy (Chuck) Morgan, of Vermilion, Lee (Debbie) Dohanos, of Vermilion, Patty Loop, of Painesville, and Dale (Susan) Dohanos, of Monroe, North Carolina, and a son-in-law, Scott Northeim, of Oberlin.
Preceding him in death were his father and mother; Andrew and Elizabeth Dohanos, sister, Eleanor Garcia, brother, William Dohanos and, very recently, his step-daughter, Joy Northeim.
The family will receive friends on Thursday, March 18, 2021, from 3 – 7 pm in the Dovin and Reber Jones Funeral & Cremation Center, 1110 Cooper Foster Park Road, Amherst. The Lorain Sports Hall of Fame will be conducting a brief service at 6:00 pm. Private family services and burial will be held on a later date. To send an online condolence, please go to www.dovinreberjones.com.
In lieu of flowers, donations may be made to the Clearview High School Endowment Fund or the Lorain City Schools Endowment Fund.
Due to the COVID-19 pandemic the funeral home will be following specific guidelines to ensure the safety of all visitors. We ask that you enter through our main entrance of the funeral center, please pay your respects to the family, and exit through our gathering center door. Face coverings are required, limited seating will be provided for the service to ensure that a six feet separation is maintained.